When Maten first came to Shichida at one year and nine months old, he was timid, couldn't speak, and stayed close to parents at all times. Back then, he wasn't able to use his hand efficiently as his hand muscles were not strong enough. He couldn't participate well in class, and his parent often needed to take him out during lessons. However, after three months at Shichida, he showed a great progress. He started to demonstrate his abilities and talents along with higher concentration. His outstanding talent was in his super memory; he attained 99% of accuracy in memorizing link memory. He started with blue board and then went on to flashcard link memory. He now can speak confidently with his instructor; his hand muscles are gradually getting stronger, and he can hold a pencil correctly. 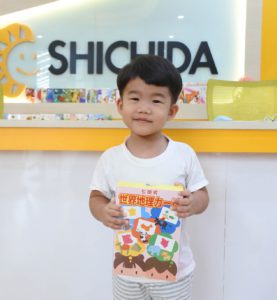 In addition to studying in class, his father also used the Shichida Method to teach him at home. His father did the flag flashcards at home for one month, and then he came with surprise to tell us that Maten memorized all the flags of 120 countries in the world. After that his father started to show him the map flashcards, he did it about three weeks and then again, he came with a happy smile to tell us that now Maten also memorized the maps of 120 countries. We also were amazed that he could do it in such a short period. Then, we requested his parents to record his performance in front of a video camera. An instructor showed all the flags and maps of 120 countries; he identified all of them correctly.
Because of Maten's parents' interest in the Shichida Method, enrolling him, taking him to class regularly, and exercising the method even at home, Maten developed his ability very quickly and became the person he is now.
Maten still attends his Shichida class regularly with his father. He continues to show his high concentration in class. He is good at mazes, Cho Cho ban, Lao language, and number activities as well. We are very proud of him. 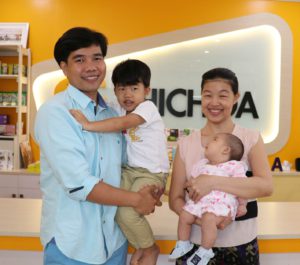