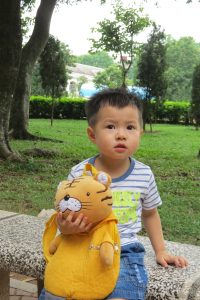 Mother: Bin learned to speak and sing at an early age (14-15 months). Amazingly, he didn’t have a lisp like many children but accurately spoke all the words he learned. Bin has an awesome memory as he can memorize the lyrics of numerous English and Vietnamese songs as well as poems and the stories that his mom reads to him. Bin’s imagination and creativity are spot on. He loves roleplaying with Mom and Dad, sometimes as a sailor, sometimes as Superman, sometimes he climbs mountains and other times, he encounters sharks while swimming.
Bin puts together creative wooden puzzles into a swimming pool, a castle, a house and so on. Sometimes, Bin even creates his own poems or songs. Bin is confident and well-behaved, especially when it comes to communication. Moreover, Bin is independent in his personal care activities such as dressing or going to the toilet. During lesson time, Bin is extremely focused and confident. He even once volunteered to be the MC on stage. Bin loves observing and noticing the little things. Additionally, Bin has well-developed senses. He has a sharp pair of ears and nose, which helps him identify the foods his mom makes. He also has a self-healing ability. An example of this would be the time when he had a high fever, his mom whispered to Bin, telling him he would recover the day after and he did exactly that!
Testimonial at Age 3.0